The Engineers of the Future are T-shaped’ – What Does the World’s Leading Industrial Automation Supplier Want from its Future Engineers? Finland’s Greatest Industry Event MPD is the Manufacturing Crystal Ball

‘Digitalization is impacting everything, including the lives of us engineers. Like the great industrial breakthrough of Ford’s T-model automobile assembly line, success in the future is guaranteed by T-shaped engineers’, predicts the Group CEO of Fastems Corporation, one of the world’s leading industrial automation suppliers. A glimpse into the industrial future is offered at Tampere’s Tähtiareena where Finland’s most important industrial event MPD opens the doors to the future of work. 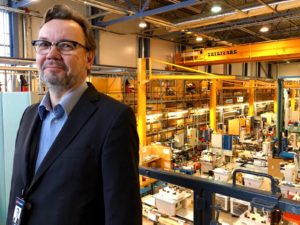 Tomas Hedenborg is a modest man even though there would be many reasons to praise him. Hedenborg leads the Fastems Corporation, which offers top global manufacturing companies some of the most progressive automation systems available. The company is discrete in regard to its customers but from the net one can spot several companies benefiting from Fastems technology, e.g. Wärtsilä, Daimler and Siemens.

‘Clearly we can not expose confidential information about our customer relationships but of course we are extremely satisfied that many of the world’s most interesting companies trust us. The most important thing is to remain at the forefront of development. One has to be able to produce the significant added value expected by our customers in this evermore rapidly changing world we live in’, formats Hedenborg.

‘If we picture the mechanical engineer of the future, in addition to one’s own deep expertise in one area, the engineer has to understand e.g. software, control systems, business as well as customer experience and service design’, defines Hedenborg.

MPD: The Window to Ecosystem Economy

Fastems is strongly involved in Finland’s biggest and most significant industrial event MPD, which will be organized at Tampere’s Tähtiareena 4.-6.6.2019. This year’s theme is ecosystem economy.

‘MPD has its finger on the pulse. Digitalization enables extremely broad platforms for compatible technologies and business models. Therefore, industrial players can no longer succeed on their own but instead getting growth to fly requires cooperating with the best possible partners. Thus, the participants of an ecosystem enable their own success as well as the success of the ecosystem’s other participants’, describes Hedenborg, who is also the Chair of the MPD Organizing Committee.

‘T-shaped expertise and ecosystem economy are closely linked to each other. The T-Model is necessary to ensure that the know-how of our engineers is sufficiently multidisciplinary to meet the needs of both the customers and partners. An important and necessary challenge is to study exactly what sets of competencies are needed in specific job tasks. I believe that the MPD will open a very important window towards the future of work’, predicts Hedenborg.

Hedenborg is also the President of Orgalime, The European Technology Industries association. MPD is a unique vantage point for the top industrial influencers themselves.

‘At Fastems we strive to create products, like our MMS Manufacturing Management Software, that represent the most advanced technology in the industry. MMS strives to constantly predict the performance of production and to be one step ahead, so that the right resources are always available for use on time. MPD is similar in a sense: by participating in MPD one receives the best up-to-date and in-depth understanding of the direction we are going towards in regard to manufacturing and the ecosystem economy. In order for us to be able to be one step ahead’, describes Hedenborg.